These symbols all represent aspects of the clan's history, and are explained below - or on the page about its Legends.
The burning mountain on the Cromartie Crest actually represents a hill with fiery beacons on it and this is linked to
The Clan MacKenzie War Cry
"Tulloch Ard"
which is the name of the hill in Kintail
upon which beacons were lit to summon the clan to battle. 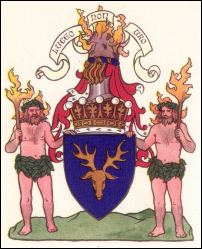 This is the Chief's Coat of Arms - it is not the clan's - i.e. it is Cabarfeidh's personal property.
These arms may not be used by clan members or anybody else in such a way as to suggest it is their coat of arms.
The use of these arms is a matter of law in the United Kingdom and is regulated in Scotland by the Court of the Lord Lyon.
Strictly speaking the actual "arms" are the symbol on the shield - the stag's head or cabarfeidh - and the story about it is here.
The "supporters" - the wild highland men on each side of the shield - are an indication that these arms are those of a clan chief.
The burning mountain at the top of the arms form the Chief's Crest and it can be used by clanspeople in the form shown below.

The Latin Motto, Luceo Non Uro, means "I Shine Not Burn"
The burning mountain crest came from the MacLeods of Lewis when their lands were taken by the MacKenzies in the 17th century. It’s believed to symbolise the fiery mountain-top beacons used to warn when sea-borne enemies were spotted by the coastguards or watchers. Lewis tradition suggests this role was originally fulfilled for the MacLeods by the MacNeacaills or Nicolsons who inhabited the islands before the Norse ancestors of the MacLeods arrived and became the lairds of the island. The MacLeods of Lewis still use the Latin motto Luceo non uro, though they also have a Scots-language version of it: I birn quil I se, which is translated into modern English as “I burn while I watch”.

The motto comes from the 78th Foot and it was combined with the stag's head as the badge of the new Seaforth Highlanders who were created in 1880 by the merger of the two regiments originally raised by chiefs of Clan MacKenzie (72nd & 78th Foot) - see the MacKenzie Regiments. This was then enclosed by the buckled belt to become a second crest badge that all members of  Clan MacKenzie could wear.

The original badge that a clansman would wear in his bonnet was the sprig of a plant.
The holly was the chosen plant of a number of clans, but the holly used by MacKenzies was variegeted.