Kenneth 4th Earl of Seaforth died in France in 1701 to be succeeded by his Roman Catholic son Uilleam Dubh (Black William). His cousin Sir George MacKenzie of Tarbat on the other hand became a minister in the government of Queen Anne - being made Earl of Cromarty in 1703 - and was also a prime mover of the Union with England in 1707. After the succession to the British Crown of "German Geordie" in 1714, Seaforth raised the MacKenzies in support of James "The Old Pretender"; but following the failure of "The '15", went back into exile, having had his lands and title taken from him. He helped lead the Jacobite rising of 1719 in Kintail, which was put down at the Battle of Glenshiel where he was wounded fighting alongside Rob Roy MacGregor. He died in 1740, but when his son Kenneth, who was known as Lord Fortrose, refused to raise the clan for the Jacobites in 1745, it was George 3rd Earl of Cromarty who led a regiment of MacKenzies - mostly from his own branch of the clan - in support of Bonnie Prince Charlie. For that he lost his title, his lands, and very nearly his life. See Coigeach Branches. 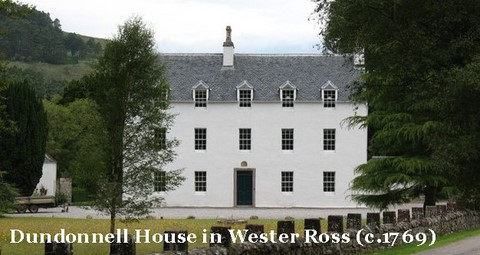 The MacKenzies did not suffer as much at the hands of the government as many other Jacobite clans in the aftermath of "The '45", though continuing social and ecomic changes encouraged some to follow banished Jacobites overseas. Cromarty's son John, who was known as Lord MacLeod, pursued a successful military career abroad, and when the American Revolution broke out he returned home to raise a regiment from the family estates for the British Army. Lord Fortrose's son Kenneth, who'd had the title Earl of Seaforth restored to him in 1771, followed suit and died at sea with his regiment in 1781 [see MacKenzie Regiments]. He was succeeded as Chief - though not as Earl of Seaforth - by his father's second cousin Colonel Thomas MacKenzie-Humberstone who died in action in India in 1783. He was succeeded by his brother, Francis Humberstone MacKenzie, who raised a third regiment from the clan lands in 1793 following the outbreak of the French Revolutionary Wars. He was elevated to the British peerage in 1797 as Lord Seaforth and Baron MacKenzie of Kintail. See Kintail Branches.