When Alexander of the Isles claimed the Earldom of Ross and fought the king's cousin at Harlaw in 1411, the MacKenzies' loyalties are uncertain; but following the confirmation of MacDonald as Earl of Ross, the MacKenzies became his vassals and were bound to Clan Donald by ties of marriage. In 1427 the King arrested MacDonald and many Highland chiefs - including Coinneach Mor, presumed chief of the MacKenzies - and this marked the beginning of a concerted campaign by the Crown to control the Highlands and its clans. The MacKenzies split with the MacDonalds in the four years of warfare that followed - thus finding themselves at odds with the Mathesons, who had adhered to the Lords of the Isles - and loyalty to the crown, whenever possible, thereafter became the watchword of Clan MacKenzie. See Cuidich 'n Righ. 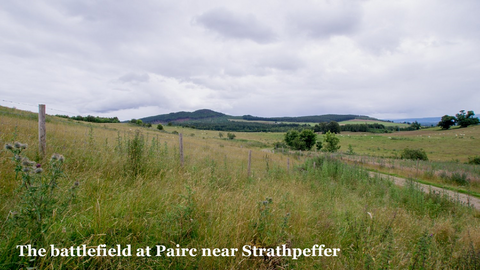 Alasdair Ionraic (Alexander the Upright) is the earliest certain MacKenzie chief to be documented, and in 1466 he appears as "Alexander Mackennych" - which is the first contemporary record of the clan surname. His son Kenneth is said to have dramatised the clan's break with the Lords of the Isles by sending his one-eyed MacDonald wife home on a one-eyed horse with a one-eyed servant and a one-eyed dog - thus provoking a Clan Donald invasion of Easter Ross that was repulsed at the battle of Pairc. This earned the victor the sobriquet Coinneach a Bhlair (Kenneth of the Battle) and is generally taken as marking the beginning of the MacKenzies' rise to prominence in Ross-shire. Kenneth's brothers Eachan Ruadh (Hector the Red) and Duncan both founded branches of the clan, as did his four sons. See Branches from Kintail.