The traditional clan histories suggest a close connection between the early MacKenzies and the MacDougalls of Argyll, who vied with their cousins the MacRuairis of Garmoran and the MacDonalds of Islay - all branches of Clann Somerhairle - to be Ri Innse Gall; i.e. Kings of the Isles. Their rivals the Kings of Man had established a member of their family, Leod, on the islands of Lewis & Harris, and some of his clan, the MacLeods, became mainland lords in Assynt and Gairloch. Skye remained a prize for which all of these island dynasties, and the Earls of Ross, contended; and the Matheson-MacKenzie kindred in Kintail, as constables of the strategic castle of Eilean Donan, were key players in these battles - which in the late 1200s became emeshed in the wider struggle for the kingship and independence of Scotland. See Map. 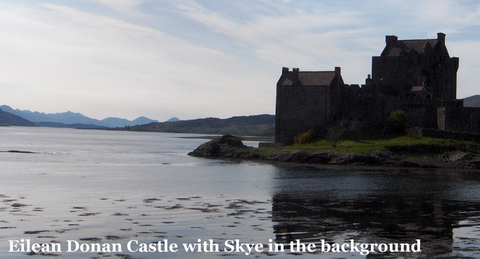 The Matheson-MacKenzie kindred probably followed the Earl of Ross in supporting John Balliol when he was chosen as king. Like many others however, Ross eventually came over to Robert the Bruce, and it's assumed the Mathesons & MacKenzies were therefore with him and Bruce at Bannockburn - as the MacKenzie histories say [see Cuidich 'n Righ]. Thirty two years later, Coinneach na Sroine - for whom Clann Choinnich may have been named - was executed at Inverness by the Earl of Ross. This may be a sign that the Kintail clans were increasingly caught between their traditional loyalty to the Earls of Ross in the east and the rising power of Clan Donald in the west. There Bruce's ally Angus Og MacDonald had seen off the MacDougalls & MacRuaris, and his son had become undisputed "Lord of the Isles". See Ancestors.